No one has ever managed to tame this tempestuous land 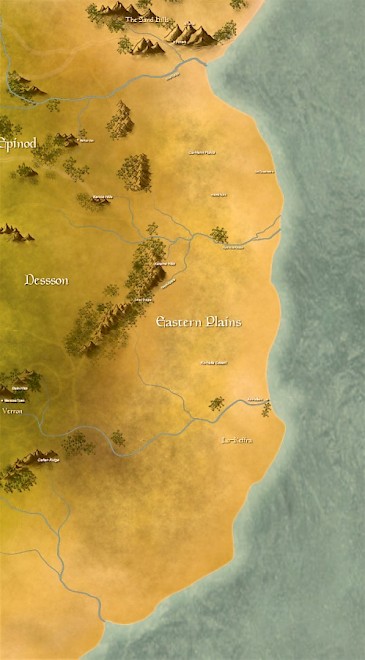 Stretching from Wessen in the far north, all the way down the eastern side of the continent to South Homeland in the south, the Eastern Plains accounts for nearly twenty-five percent of the land area of Orl-Earde.  For the last few thousand years, the land has been the most arid zone of Dirt, with agriculture only truly possible along the banks of the three great rivers.

Long before the rise of the earliest Haften Empire, it is believed that the Eastern Plains was home to perhaps one of the most powerful civilisations. In areas of the region that are now seen as near uninhabitable, there is still vague, tantalising evidence of great cities, far larger than anything found on Dirt today or even during the times of the empires.  Now nameless, the largest of these, situated some forty leagues north of the River Al-ne-Kelaine, along the path of a dry river bed, is thought to have been home to some twenty or thirty thousand people. However, the ruins are little more than low walls, and indentations in the sand and only the Dragons get a true idea of the extent and complexity when viewed from the air.

There are no accounts of the fall of this civilisation, other than ancient stories carried by the Pharsil-Hin and Keffra-See peoples that tell drought sweeping the land and rivers drying, turning the broad, sweeping grasslands to desert.

With the passing of those original people, no single civilisation has had any true control over the lands with the exception of the people of Ponack in the Sand Hills in the north and the Keffra-See located around the town of An-Hellern in an area they call Lo-Keffra.

Often thought of as the home of the Draig yr Anailr, the Sand Hills are the most northerly region of the Eastern Plains

It was pointed out to me that at least some of the Eastern Plains could be compared to drier regions of Rajasthan. with the Sand Hills perhaps resembling some of the area around Jaigarh Fort.

In some ways, this is an impossible part of Bind, because to have an arid zone the entire way up one side of a continent I think would cause headaches for most meteorologists.  However, it makes for some nice story telling and I might play with stories from thousands of years in the past one day ...