His simple outlook on life put him at a huge advantage 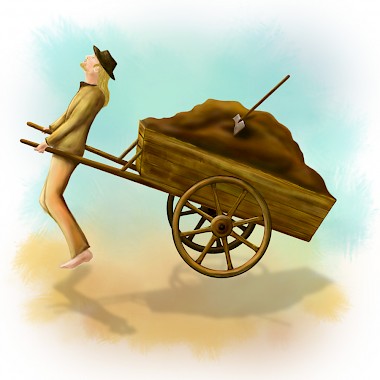 Johnson Farthing, son of Ferall "Bent" Farthing and Deidre was born in Wead-Wodder and lived his formative years in The Wealle in a small, poor apartment.

His very young life, like many of those born on the hill, consisted of kicking around in the dirt with other young children and earning 100ths (the small, almost valueless coin) by running small errands through the town.  What money the family had was earned by his mother as a general maid to a trader.

His sister, two years his junior, was very much under his protection as he grew older, and when his mother died when he was only thirteen and his father abandoned them to work on a trading ship,  he built a cart and tried to earn a living.

As a very young man he could not earn enough and he took to stealing food to keep them fed and to avoid the embarrassment of handouts from the well-known pie-seller Barkles and his wife Hetty, who took some responsibility for the two Farthing children after the departure of Bent.

Thier lives improved a little as Rustina reached fifteen and, through Geezen Truk, secured a valuable position as a maid in Slypa Burh, the Prelate's Palace.

Open if you have read "The Fight for Dirt"

Few have had a more formidable or noteworthy war career as has General Farthing, notable especially since he held such a position in his early twenties.

Under the tutelage of Honnes Haggerhead, Ben Lowen and Martin Heel, and with the guiding hand of the Westerner Sir Tannon Linland, Johnson Farthing inspired a fierce loyalty in the ranks of Pree's Army that few could claim to have achieved.

At least part of his success was that he himself was never comfortable with his rank and associated himself with the common soldier and they with him.  It might have been Pree's dream that gave them the reason to fight, but when it came to the battlefield, they fought for the poverty, ordinariness and commonality that was Johnson Farthing.  He was their brother, their father or their son; they recognised him and would stand alongside him.

Pree's Army, unlike the armies of their enemies, suffered no desertions at any time, even though it was known that there was no punishment for desertion.  This gave General Farthing a powerful weapon, and with the guidance of those more experienced than he, he won battle after battle.

Open if you have read "Hope"

It is probably gratifying that Johnson Farthing saw a peaceful life for many years following the end of the war.  That he decided to disappear from the record in his mid-twenties must have been a frustration for many, but accounts written many years later showed that his life in South Homeland in Bind and on the Isle of Hope was, for the most part, only aggravated by the day to day struggles that most face, and he was able to escape the upheaval on the continent that plagued that era.

He eventually died in his early fifties after a long illness in the company of his family.

Johnson Farthing is the opening character and the backbone of the first story.

I wanted to create a character that could take on responsibility at an early age while still suffering the angsts of being a teanager.  Farthing gets angry, impatient and can be impetuous, but he has been responsible for his sister since even before his mother died, and that underlying character is what propels him into herodom, rather than the fact he is tall, strong and becomes an expert swordsman.

Farthing is also the common man, the person (of any species or gender) who makes up the majority of society and who is ultimately the person from which society is shaped.

I chose the name of a tiny, now obsolete, British coin, the farthing, as his name because it is a coin of such low value.  But if you have enough of them, their value can be huge.  If you are poor and hungry, then a Farthing is the most valuable thing in the world and is worth fighting for.  In the end, that is true of Johnson Farthing too.