The continent that was in the past known as The Prelates has had various names over the years. 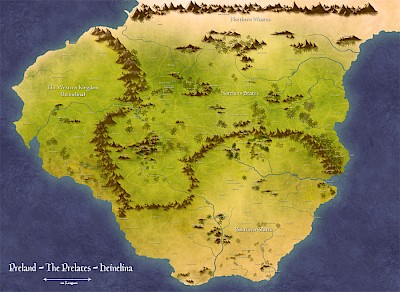 Originally known as Dwy-Earde (pron: dwee-ay-ard), the East Land, in the most ancient of tongues, for many years it was known as Heinelina (pron: hay-in-ay-leen-ər) before the rise of the Prelature.

Although the south of the continent is warm and dry, there are none of the vast areas of desert and scrub that can be found on Bind (Orl-Earde)  and this has led to a generally more populated land, especially north of the Red Mountains.

The continent is divided into three regions by two vast mountain ranges.

The Western Alps runs south to north starting on the south western coast line and finishing at the north eastern coast, not quite conjoining the North Hoar Ridge.  These are some of the most spectacular mountains on Dirt, tall enough that many are tipped with snow much of the year and, with high valleys blocked by glaciers, the only practical way past the ridge is using the broad valley pass at Tepid Lakes through which runs the beautiful river Sellon.

The Red Mountains start in the south west near the southern end of the Western Alps, continue east for come 130 leagues before turning north then arching back east until they meet the Yonder Sea at the border of Mudlands and Redust. For the few who have seen accurate maps of the continent, the Red Mountains resemble an inverted saucepan.

Although the Red Mountains are a far gentler range than the Alps with many passes, they have been an effective political divide over the millennia and the culture north and south, even when, in theory, ruled by a common ideal, has always differed.

The far north of the continent, along the line of the North Hoar ridge is a semi-wasteland that has never been conquered and is home to warring nomadic tribes and town-based war lords. Hunting is good in this region, though crops are minimal. In times past this led to much raiding of states to the south, but this has largely been replaces by trading, especially for the few mineral resources mined in the ridge.

The North Hoar Ridge along the continent, and the vast, unmapped range of mountains extending farther north are thought to be very rich in resources, most notably iron, but the harsh environment has prevented most exploration and exploitation.

More often joined than separated, these two small countries are in one of the more beautiful areas of the southern states

Redust first became a country under the control of the Prelate Fiele, one of the prelates associate with Gofan Hemona.